Toggleable, contextual menu for displaying lists of links. Made interactive with the dropdown JavaScript plugin.

Wrap the dropdown's trigger and the dropdown menu within .dropdown, or another element that declares position: relative;. Then add the menu's HTML. Dropdown menus can be changed to expand upwards (instead of downwards) by adding .dropup to the parent.

Dropdowns are automatically positioned via CSS within the normal flow of the document. This means dropdowns may be cropped by parents with certain overflow properties or appear out of bounds of the viewport. Address these issues on your own as they arise.

Add a header to label sections of actions in any dropdown menu.

Add a divider to separate series of links in a dropdown menu.

Add .disabled to a <li> in the dropdown to disable the link.

Group a series of buttons together on a single line with the button group. Add on optional JavaScript radio and checkbox style behavior with our buttons plugin.

When using tooltips or popovers on elements within a .btn-group, you'll have to specify the option container: 'body' to avoid unwanted side effects (such as the element growing wider and/or losing its rounded corners when the tooltip or popover is triggered).

In order for assistive technologies – such as screen readers – to convey that a series of buttons is grouped, an appropriate role attribute needs to be provided. For button groups, this would be role="group", while toolbars should have a role="toolbar".

One exception are groups which only contain a single control (for instance the justified button groups with <button> elements) or a dropdown.

In addition, groups and toolbars should be given an explicit label, as most assistive technologies will otherwise not announce them, despite the presence of the correct role attribute. In the examples provided here, we use aria-label, but alternatives such as aria-labelledby can also be used.

Wrap a series of buttons with .btn in .btn-group.

Instead of applying button sizing classes to every button in a group, just add .btn-group-* to each .btn-group, including when nesting multiple groups.

Place a .btn-group within another .btn-group when you want dropdown menus mixed with a series of buttons.

Make a set of buttons appear vertically stacked rather than horizontally. Split button dropdowns are not supported here.

Make a group of buttons stretch at equal sizes to span the entire width of its parent. Also works with button dropdowns within the button group.

Due to the specific HTML and CSS used to justify buttons (namely display: table-cell), the borders between them are doubled. In regular button groups, margin-left: -1px is used to stack the borders instead of removing them. However, margin doesn't work with display: table-cell. As a result, depending on your customizations to Bootstrap, you may wish to remove or re-color the borders.

Internet Explorer 8 doesn't render borders on buttons in a justified button group, whether it's on <a> or <button> elements. To get around that, wrap each button in another .btn-group.

Just wrap a series of .btns in .btn-group.btn-group-justified.

If the <a> elements are used to act as buttons – triggering in-page functionality, rather than navigating to another document or section within the current page – they should also be given an appropriate role="button".

Use any button to trigger a dropdown menu by placing it within a .btn-group and providing the proper menu markup.

Button dropdowns require the dropdown plugin to be included in your version of Bootstrap.

Turn a button into a dropdown toggle with some basic markup changes.

Similarly, create split button dropdowns with the same markup changes, only with a separate button.

Button dropdowns work with buttons of all sizes.

Trigger dropdown menus above elements by adding .dropup to the parent.

Navs available in Bootstrap have shared markup, starting with the base .nav class, as well as shared states. Swap modifier classes to switch between each style.

For tabs with tabbable areas, you must use the tabs JavaScript plugin. The markup will also require additional role and ARIA attributes – see the plugin's example markup for further details.

If you are using navs to provide a navigation bar, be sure to add a role="navigation" to the most logical parent container of the <ul>, or wrap a <nav> element around the whole navigation. Do not add the role to the <ul> itself, as this would prevent it from being announced as an actual list by assistive technologies.

Note the .nav-tabs class requires the .nav base class.

Easily make tabs or pills equal widths of their parent at screens wider than 768px with .nav-justified. On smaller screens, the nav links are stacked.

For any nav component (tabs or pills), add .disabled for gray links and no hover effects.

This class will only change the <a>'s appearance, not its functionality. Use custom JavaScript to disable links here.

Add dropdown menus with a little extra HTML and the dropdowns JavaScript plugin. 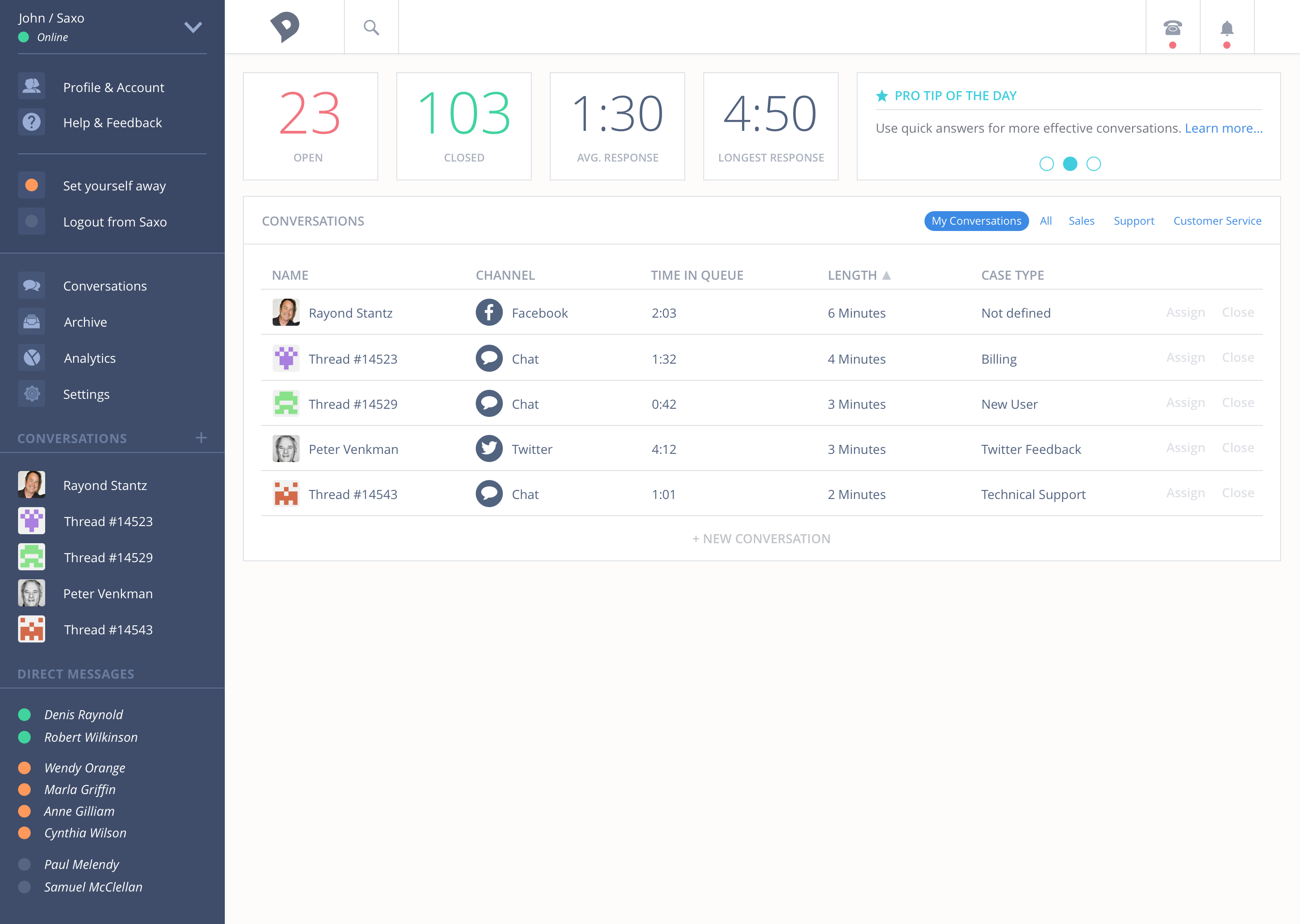 Provide pagination links for your site or app with the multi-page pagination component, or the simpler pager alternative.

Links are customizable for different circumstances. Use .disabled for unclickable links and .active to indicate the current page.

You can optionally swap out active or disabled anchors for <span>, or omit the anchor in the case of the previous/next arrows, to remove click functionality while retaining intended styles.

Quick previous and next links for simple pagination implementations with light markup and styles. It's great for simple sites like blogs or magazines.

By default, the pager centers links.

Alternatively, you can align each link to the sides:

Pager links also use the general .disabled utility class from the pagination.

Add any of the below mentioned modifier classes to change the appearance of a label.

Have tons of labels?

Rendering problems can arise when you have dozens of inline labels within a narrow container, each containing its own inline-block element (like an icon). The way around this is setting display: inline-block;. For context and an example, see #13219.

When there are no new or unread items, badges will simply collapse (via CSS's :empty selector) provided no content exists within.

Badges won't self collapse in Internet Explorer 8 because it lacks support for the :empty selector.

Built-in styles are included for placing badges in active states in pill navigations.

A lightweight, flexible component that can optionally extend the entire viewport to showcase key content on your site.

This is a simple hero unit, a simple jumbotron-style component for calling extra attention to featured content or information.

To make the jumbotron full width, and without rounded corners, place it outside all .containers and instead add a .container within.

A simple shell for an h1 to appropriately space out and segment sections of content on a page. It can utilize the h1's default small element, as well as most other components (with additional styles).

If you're looking for Pinterest-like presentation of thumbnails of varying heights and/or widths, you'll need to use a third-party plugin such as Masonry, Isotope, or Salvattore.

With a bit of extra markup, it's possible to add any kind of HTML content like headings, paragraphs, or buttons into thumbnails.

Provide up-to-date feedback on the progress of a workflow or action with simple yet flexible progress bars.

Progress bars use CSS3 transitions and animations to achieve some of their effects. These features are not supported in Internet Explorer 9 and below or older versions of Firefox. Opera 12 does not support animations.

Remove the <span> with .sr-only class from within the progress bar to show a visible percentage.

To ensure that the label text remains legible even for low percentages, consider adding a min-width to the progress bar.

Progress bars use some of the same button and alert classes for consistent styles.

Uses a gradient to create a striped effect. Not available in IE9 and below.

Add .active to .progress-bar-striped to animate the stripes right to left. Not available in IE9 and below.

Place multiple bars into the same .progress to stack them.

The default media displays a media object (images, video, audio) to the left or right of a content block.

The classes .pull-left and .pull-right also exist and were previously used as part of the media component, but are deprecated for that use as of v3.3.0. They are approximately equivalent to .media-left and .media-right, except that .media-right should be placed after the .media-body in the html.

The images or other media can be aligned top, middle, or bottom. The default is top aligned.

With a bit of extra markup, you can use media inside list (useful for comment threads or articles lists).

List groups are a flexible and powerful component for displaying not only simple lists of elements, but complex ones with custom content.

Add the badges component to any list group item and it will automatically be positioned on the right.

Linkify list group items by using anchor tags instead of list items (that also means a parent <div> instead of an <ul>). No need for individual parents around each element.

Add .disabled to a .list-group-item to gray it out to appear disabled.

While not always necessary, sometimes you need to put your DOM in a box. For those situations, try the panel component.

By default, all the .panel does is apply some basic border and padding to contain some content.

Easily add a heading container to your panel with .panel-heading. You may also include any <h1>-<h6> with a .panel-title class to add a pre-styled heading.

For proper link coloring, be sure to place links in headings within .panel-title.

Wrap buttons or secondary text in .panel-footer. Note that panel footers do not inherit colors and borders when using contextual variations as they are not meant to be in the foreground.

Like other components, easily make a panel more meaningful to a particular context by adding any of the contextual state classes.

Add any non-bordered .table within a panel for a seamless design. If there is a .panel-body, we add an extra border to the top of the table for separation.

If there is no panel body, the component moves from panel header to table without interruption.

Allow browsers to determine video or slideshow dimensions based on the width of their containing block by creating an intrinsic ratio that will properly scale on any device.

Rules are directly applied to <iframe>, <embed>, <video>, and <object> elements; optionally use an explicit descendant class .embed-responsive-item when you want to match the styling for other attributes.

Pro-Tip! You don't need to include frameborder="0" in your <iframe>s as we override that for you.

Use the well as a simple effect on an element to give it an inset effect.